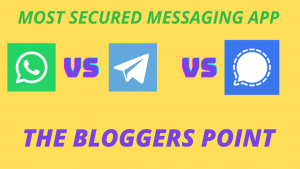 Today I will tell you that which is the most secure app for messaging .

The three that comes in the race are WhatsApp,  Telegram and Signal.          Now we will know in detail about each one of these app and the data they collect from users and will know that which one is the most secure app and which one should you use ?

WhatsApp is an American company owner by Facebook. WhatsApp was founded by Jan Koum and Brian Acton. Later it joined Facebook in 2014.

Its a widely and the most popular texting app used by more than 2 million people. The chat is end to end encrypted.  Users can share text messages , voice chats , images , documents and much more. Users can also do voice chat and video chat .

Now-a-days WhatsApp are bringing so many new updates and in its new policy update it declared that the Facebook and other WhatsApp partener can access its users data which makes most of the users doubt and make them switch to other messaging apps.

Telegram was founded on 14 August 2013 by two Russian Brothers Nikolai Durov and Pavel Durov
Telegram is a cloud based messaging app which provides end to end encrypted chats , groups with participants limit of upto 200000 members . It provides some more cool features too like bots , quizzes , anonymous messaging and much more. The company confirmed that it doesn’t shares user data with any company or organisation to keep the user’s data private.

The Signal was created by whatsapp co-founder Brian Acton and Marlinspike. It was founded on 29 July 2014 becoming and growing the most popupar app becauss of its privacy now.

“Signal” is the new app that comes In your mind when you talk about the best and the most secured messaging app that provides end to end encryption. Signal offers text , voice and video messaging . It protects your metadata providing multiple levels of security. You can also share notes to own sharing your feeling there’s. It doesn’t even shares your user data or messages to anyone so you feel more secured.

2.None other than this

Conclusion :- Signal is the most secure and safe messaging app and dont shares user data with anyone or doesnt even collects more info from users so you should must give it a try for sure.

No comments to show.