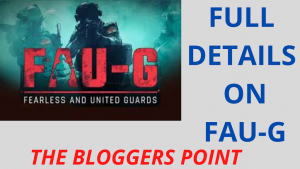 You may have heard the name of a new Indian game FAU-G. Today we will be knowing in details about this game and will be talking that how can you download this game for free .

FAUG (Fearless And United Guards) is an online multiplayer  action game developed by nCore Games which will be donating 20% of the revenue generated by the game to Bharat ke Veer Trust.

This game recorded the highest number of pre-registrations on PlayStore in India.

The game was announced by Bollywood Actor Akshay Kumar through his Twitter and Instagram handle on 4 September. On 3 Jan 2021 , the Developers of this game announced that the game will be launched on 26 Jan on Play Store.

This game came as a boon to gamers who were sad after PUBGM ban. This game was to support our Prime Minister movement known as Aatma Nirbhar Bharat.

What are the games modes available in FAU-G?

As now , only Campaign mode is available in FAU-G. But the developers said that they will add multiplayer and battle royale mode in the feature of the game and it will be quite interesting to see that how FAU-G manages to increase their game downloads and user retention.

Is In-App purchase available and what is Game size ?

Yes , In-App items purchase is available in game starting from rs19-2999 depending on bundle.

The game size is around 500 mb now and it will be surely increasing soon.

No comments to show.